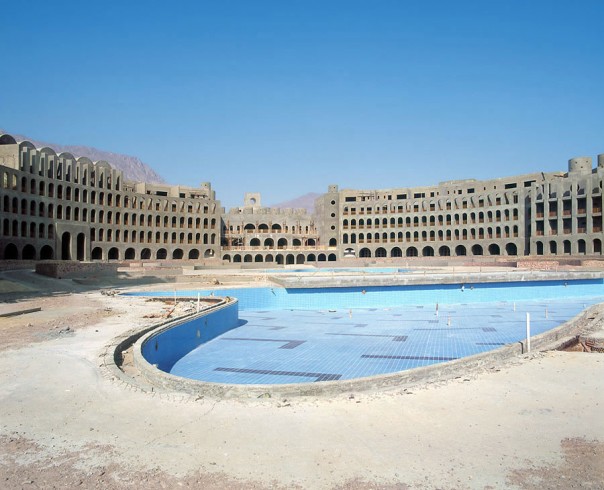 The concrete skeletons of five-star hotel complexes tower up like a mirage before the backdrop of azure sky, photographed in the desert of the Egyptian Sinai Peninsula between 2001 and 2004 in their abandoned, unfinished state by the Munich artist duo, Haubitz + Zoche. Once-intended splendour now rings only in namings charged with the promise of holiday bliss and romantic Arabian promise – ‘Sultan’s Palace’, ‘Sindbad’, ‘Sunestra’ or the ‘Magic Life Imperial’.The reasons for the abandoning of these construction projects at resort sites are many and varied, ranging from bad investment and misappropriated state subsidised loans to diminishing tourism as confidence is undermined by the reports of terrorist attacks. Haubitz + Zoche’s photographs show these monuments to failed investment  in isolation as architectonic sculptures against the background of mountain and desert landscapes without a living soul. The approach is documentary and conceptual to an equal degree. No post-location manipulation has altered the image, and on location, the artists settled on clearly defined rules of play. They photographed the buildings in fine, stable weather without dramatic contrasts in the light and with the camera at a constant eye-level position. The colour scale of these images, restricted to a few tones only, keeps within an earth ochre, stone grey and sky blue, interspersed occasionally with the soft green of seedling weeds. As a rule the photographs dispense with narrative associations, so that attention is directed to the bare physical constitution of the building.The rigorous composition of these pictures gives the structures the air of architectural models whose purified vocabulary of form, freed of all ornament, brings out the functional design. Global mass-tourism finds a meet echo in the rhetorical trove of architectural forms across the world, comprising everything from the Chinese pagoda and the temples of the Classical world to European Modernism. These ‘national’ architectural quotations proffer something like a temporary home and identity for the beach-and-culture tourists passing through. In the photographs of the incomplete hotel complexes, the strategies and mechanisms of the business of mounting tourist fantasies become an unconcealed text. ‘Sinai Hotels’ exemplifies a development in global tourism in which travel destinations become almost arbitrarily interchangeable and forfeit any inherent historical or geographical meaning they may have had.These images of architecture in an interim state are at the same time images of an emptiness recalling Giorgo Di Chirico’s metaphysical cityscapes. They also invoke associations of archaeological sites and excavations. Especially in the interior views, that impression of securing or recording archaeological evidence becomes persuasive with the view giving onto building styles harking back to palaces of classical antiquity. But, unlike the romantic ruins of Antiquity long reclaimed by nature, the queer aura of these edifices stems from the circumstance that the hotel buildings seem almost pristine. One could be forgiven for supposing in these buildings, never completed in our own time, the archaeological finds of the future. Should the superstructures indeed survive under their patina through coming centuries, the outcome would be a fictitious world architecture created with dislocated forms of the kind familiar to us from that standardised chapbook of styles drawn on for utility and functional buildings and embedded in the urbanised face of the present day.When artists turn their attention to architectural photography today, it cannot avoid being under the impulse of the oeuvre of Bernd and Hilla Becher, who, for the past four decades, have been recording the industrial architecture of the western hemisphere as ‘anonymous sculptures’. The Bechers’ conceptual works have been a formative stylistic influence on successive generations of photographers and Haubitz + Zoche too are conscious of this seminal background. A Becher ‘trade mark’ is seen in the isolation and precise rendering of the object in uncompromising axial full-frontal view. As most of their architectural shots lack any relation to the environment, the motif, seen against an evenly overcast sky, becomes highly sculptural. Irrespective of an affinity to the works of the Bechers subsisting chiefly in the sculptural look of the subject, the photographs of Haubitz + Zoche differ in their more flexible choice of perspectives – oblique views are permitted. The desert presents the ideal blank screen and a fitting foil for a symbol-like architecture that may be seen as a morphological typology, in additive or comparative fashion alike.From an aesthetic point of view, the points of reference for Haubitz + Zoche, as for Stephen Shore in his cycle, Uncommon Places, are the stereotypes of the tourist picture postcard. Photography in their hands is a repository and memory-bank of a specific, transient state. In that sense the photographs of Haubitz + Zoche are eloquent of the paradoxes of an architecture that also depicts the contradictions of our time.